Alternative title- Facebook what have you done to my page?

I agree it’s not easy to find things on that page, so here’s a list of runs you might be looking for-

1. You see lovely calves on a woman in front, realise she’s wearing heels and wince
2. You see calves on a guy in front, realise they’re bigger than yours and wince
3. You see a guy with blood running out of both nipples and feel his pain
4. Someone describes your ‘joggers’ and you correct them
5. You wonder if business shoes come in ‘zero drop’
6. If wearing black is slimming, and running is slimming, then why is running wearing black just stupid?
7. You can justify just about anything you eat, do or don’t do by using various combinations of the words ‘carb loading’ ‘tapering’ ‘LSD’ ‘Fartlek’ ‘bonk’ ‘DOMS’ and ‘hydration’
8. You laugh at people who turn up for a 5km with a hydration pack
9. That’s not a pretty woman up ahead, that’s a mild supinator with overstriding issues, weak gluteus and too much hip movement*
10. You realise the cheaper the run, the more vomit inducing the T-Shirt will be
11. Getting ‘chicked’ isn’t as fun as it sounds

*anatomically impossible? I have no idea, I totally made this up

I’ve finally come to the conclusion that something is wrong. I have been very lucky having the support of some amazing people, so I know it isn’t my training. I’m putting in the required distance, including some hard efforts and generally doing what is needed.

However my big problem is this- I have plenty of engine going downhills or on flats, but as soon as the terrain heads up, my gasket pops and I have nothing to give. It’s a long standing issue, and I’ve mostly been able to cover it by catching up with the group on flat or downs, but it really does need some attention.

I had a small victory on Saturday, when things were a little easier, so maybe Sam Walker was right- overtraining.

I seem to be able to sustain a heartrate of 160bpm going downhill and still have breath for talking. On the flat I can be pretty comfortable at 130bpm running 5:15 min/km.

BUT, put a hill in there and I can hit 140bpm and my breathing goes crazy. I have to stop and wait for it to pass. Short steps helps a bit, but not much.

Here’s a couple of possible reasons-

1. weight. I am a couple of kg heavier than I’d like to be, but I don’t care enough to fix this, and it seems to be an ongoing issue so this is unlikely to be the cause, but being lighter would help

2. VO2 max. I hope to have this tested as it is the most likely explanation. I was an asthmatic child so I’m guessing my lungs don’t hold much or are not very efficient

3. Not fit enough. Pah, not prepared to go there.

I’ll update when I know more!

Hi, my name is Adam and I’m a sugar addict. I use it before, during and after running. I don’t get the deep lows that stop others from using it during races, so I consider myself to be fairly lucky. One thing I have noticed though, is that the guy in the running store looks at me a bit funny when I come in all the time for my fix, er I mean another box of gels. He looks at me even more strangely when I go through the racks and add to my pile a whole bunch of anything new. Most people have sensitive stomachs but I’m lucky enough that I can eat almost anything during a run. And I like pretty much all of the commercial gels on the market, except SIS- Science in Sport. Oh, you have them? Take a look on the side where it says ‘no simple sugars’. Are you f/ing kidding me? Where were my simple sugars when I needed them going up the side of Mt Solitary a few months ago, buddy? That mistake cost me at least 15 minutes…… but I digress.

I use Endura (Citrus and Raspberry, the grape tastes like some horrible lolly at the bottom of a cheap Christmas bucket)  but have to be careful of the (8mg) caffeine content. And I especially like the Accel Gel Key Lime with protein (tastes like cheesecake, yum!). However in a long race I’ve been finding that it’s a bit of a pain keeping the rubbish from flying out of your pocket. And if I forget to empty my pockets at checkpoints, the sticky rubbish really builds up. So I decided to make my own.

After much internet research I found a good starting recipe here, they even sell an ebook with recipes. But I wanted to start very simple, and wanted something that does not need cooking. I’m pleased to say after a few false starts, I finally have an easy recipe that works. Here are the ingredients- 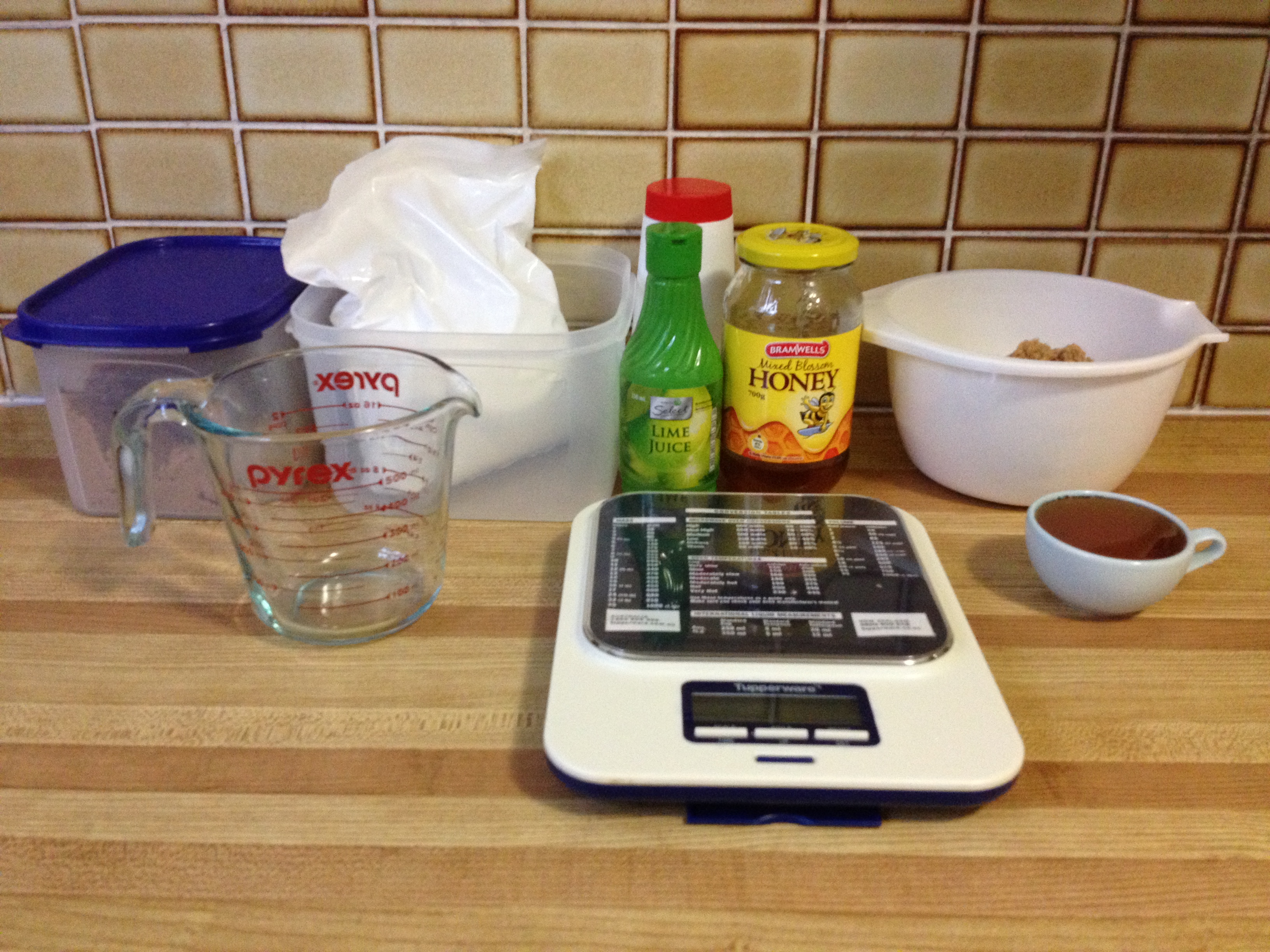 The 1970’s called, they want their kitchen back

Maltodextrin
Available from health food shops or over the internet. This is a multiple chained carbohydrate often added to foods for bulk. It is easily digested and provides a runner with longer lasting energy than a simple sugar, and doesn’t ‘bonk’ so badly. I paid $28 for 2kg from a health food shop, but I’ve found out that this money would have bought me 5kg or more if I’d shopped around.

Water
That stuff that comes out of a tap

Lime Juice
Originally from a lime, this time it came out of a squeezy bottle in my fridge

Honey
There’s a rumour that the worlds bee population is collapsing, you should read up on why this will possibly mean the death of all human life on the planet. Or perhaps you can just go to your cupboard and get out the sweet tasting fruits of the stinging insects labour

Brown Sugar
This is where I link to a Rolling Stones song isn’t it? This is my one concession against simplicity- I could have used any other kind of sugar, however this was available and it does have a decent flavour.

Put all the ‘other’ ingredients into a bowl and slowly add the water, while mixing. The mixture will need to be mixed quite a lot and it doesn’t hurt to leave it for a while and come back to attack those lumps. In general, the less water you add the less thin the result will be, but you’ll have to chase more lumps. This makes the equivalent of 16 gels, and I pour the mixture into Endura flasks (bottom of this page).

Calculations
The Endura flasks each store about 125ml of mixture. If you have a look at this page you’ll see that the average serving size is about 30-45ml, so I’m going to estimate a serving size of 32ml or 4 servings to a flask.

Comparing to the table again here, we find that both the carbohydrate and the energy available from our mix is roughly the same, gram for gram. Our serving size is a little smaller and our energy properties are correspondingly smaller, but definitely within the range we would expect. Sodium figures vary wildly between brands, we can easily change this but I’d have to say from experience the sodium is ‘adequate’. 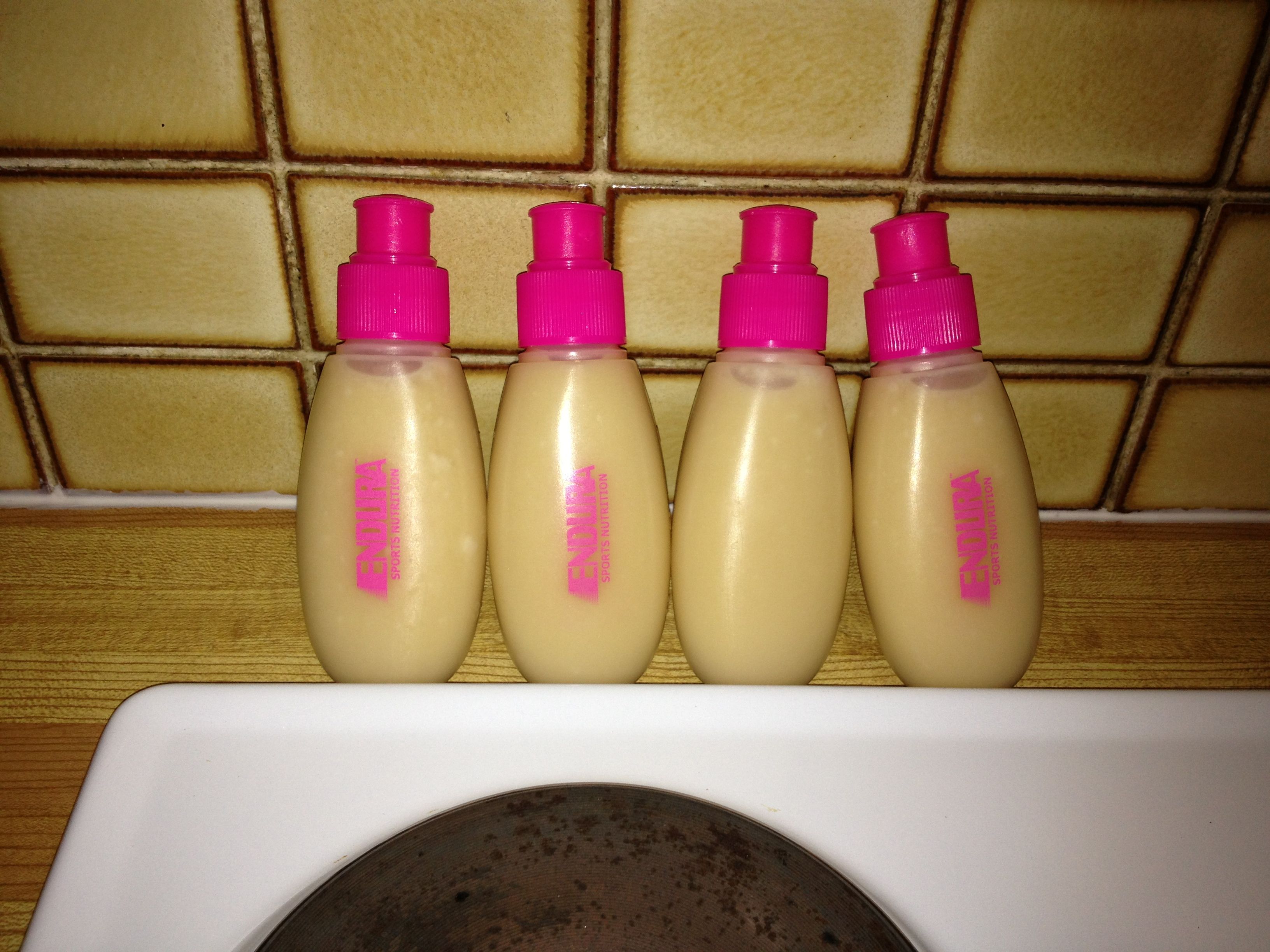 One of these flasks is not like the other ones

Storage
I store these in the freezer. They don’t actually freeze, but I figure they will last a bit longer in there.

Longevity
I had an unused flask left out of the fridge accidentally for over 2 weeks and it looked fine, so I’ve stopped worrying about whether it will give me some nasty bug. I’m not sure why- I guess it would have something to do with the natural preservative action of the honey, the PH of the mixture or the fact that I use lime juice with preservatives? Who knows a food technologist?

Flavour Options
You could swap the water for coffee- that would give you a small caffeine boost in each sip. One shot or 100mg of caffeine over 16 gels is 6.25 mg per gel, a little less than you’d get in an Endura. Or potentially make this a bit simpler by ditching the honey, brown sugar, water  and lime juice and substituting for a fruit based cordial. I didn’t do this because I didn’t want to re do all the calculations!

Anything else?
Each one of these flasks will help you to run 30-40km, but I usually supplement with something else to break the boredom. I always carry 2 flasks on me, but have one wrapped in a sandwich bag so it can go back in the freezer if not used. I always throw out whatever is left in the used flask at the end of a run. Also, as seen on another site, it’s not recommended to use any protein supplements in these home made gels as they will go off rapidly……

Please let me know if you have success with these ideas, or if you have any new recipes, thanks!