I’ve been posting about my bad knee on FaceBook for a while, and I need to thank everyone for their input. The way I’ve chosen to do this is to summarise all of the info and rate it for scientific validity and/ or whether I feel like trying it. PLEASE understand that even if I think your solution is as welcome as a fart in an elevator, this doesn’t mean I dislike you or your opinions. It’s a simple discussion about whether I like the idea or not. And I could be wrong.

First up, let’s have a look at what the MRI says- 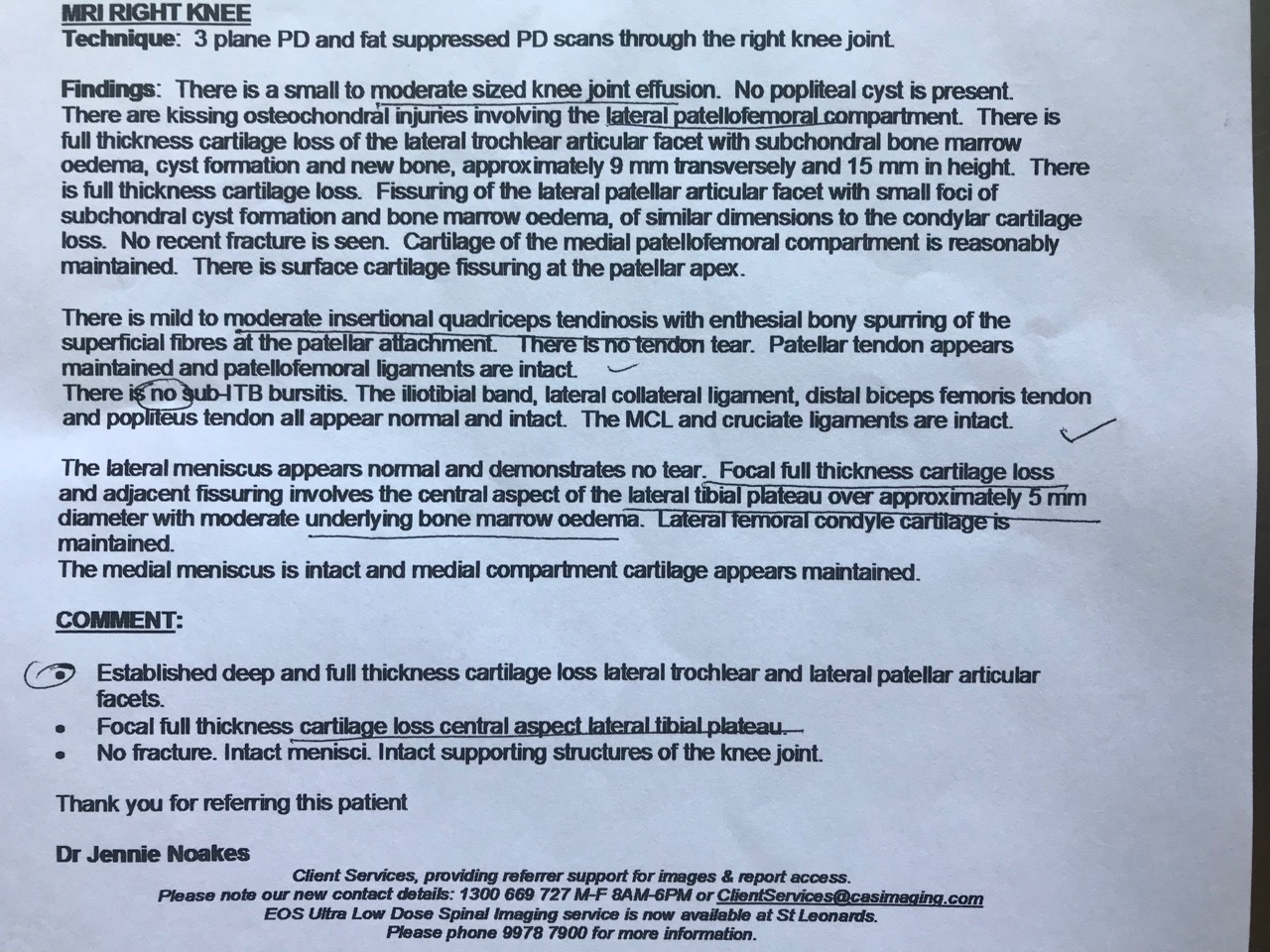 To my medical friends- I am not posting this so I can get free advice but maybe you have some professional interest. It bugs me when someone has a vague computer problem and I never find out what was wrong. Same thing here.

So here is the list of thing that were suggested

I’ll take these one by one but remember that as I am old, I can’t really expect the cartilage to simply grow back. As far as evolution is concerned, at 50 years old I’m ready to be left behind when the tribe makes their next move in search of food.

The best I can expect is to make the 4 weeks of enforced rest all about getting that swelling down so we can figure out if I can run again. I’m trying very hard to keep a bit of fitness so I don’t have a really bad time when I get back on my feet.

Glucosamine/ Fish Oil
The science is a bit inconclusive on this. The theory is that if you supply the body with the building blocks of cartilage, it may decide to actually build some. That’s a rather simplistic outlook and we know it doesn’t work for everything- there are some things the body needs from food that it can’t create, but a lot of stuff is made ‘in house’ so putting more in doesn’t result in more action inside your carcass. I have glucosamine in the cupboard so I’m taking it. Fish oil has a bad reputation in the supplements market, especially in the USA where a lot of it becomes rancid before consumption. My strength trainer Dominic Cadden says that this is less of a problem in Australia due to our more stringent laws around supplements, manufacturing etc.
I’ve decided that it would be much nicer to have some smoked salmon each week, so I’ll aim for that.

Turmeric
This is the current wunderkind of the superfood wankers. It does seem that there might be some scientific approval for this if you make it more bioavailable by mixing with oil and heating. This means I need more curries and I approve of this message.

Yoga
I’m about as flexible as a plank of wood. Sarah made the whole household do some yoga for runners today, and apart from the groans and gas escaping from both ends I think my body tolerated it. Will do more

Soda Crystals
I had a look at the website, and although 2 friends swear by this treatment, I wasn’t convinced it was appropriate for me. Why? Because I’m trying to reduce the swelling in one particular area, but this looks a bit like a method to reduce inflammation temporarily, and I want more permanence. I was also unconvinced by the instructions to throw out the crystals after use, I mean I could make the same treatment out of hydrophilic crystals and re use them by baking in an oven. It’s science, not woo.

Crack Cocaine
Worth a try, have you got any?

Squats
I think this is a great idea- even when I was running on the injury, I made a comment to Coach that it felt better when I run because it keeps everything nice and tight. I think strength is a good option.

Anti Inflammatory Meds
As I only have one kidney, this option is out.

Fibrin
This seems to be a reference to reducing scar tissue/ fibrin buildup in affected areas. I still have a large keloid scar so I will investigate when I have the other stuff worked out.

Platelet Enriched Plasma
Scientific support for the concept is weak, but I’ve had several friends have treatment with positive effects. I’m sure there are a few with none or negative too, but you don’t tend to hear about those.

Stem Cells
I figured this was getting into the realm of science fiction until last Tuesday, when I was coincidentally sitting next to a woman who is a stem cell researcher. Boom! She informed me that ‘absolutely’ stem cells are going to be an effective treatment in the future, but they have to work out the right dose so the treatment doesn’t actually result in cancer. Well, um…… maybe I won’t be first in line then.
As you can see in this article promoting stem cell treatment in Sydney ‘Despite the successful results reported by these articles, stem cells have not yet  become readily accepted as a mainstream medical treatment’

Hyaluronic acid injections
This may be one of the only medical treatments available to me- the science isn’t conclusive, but for my type of injury it doesn’t seem to have huge downsides- it will either work or not. It’s basically an injection of more lubricant for the knee joint.

Steroid Injections
I decided against this for various reasons, probably the major one os that these steroids may negatively affect other parts of the joint, leaving me in a worse position. Right now my issue isn’t that bad, it’s a question of maintenance and not making it worse!

Lose Weight
Sadly, I have gained over 10kg since Badwater, and it makes sense that I can relive pressure on my knees simply by weighing less. So goodbye fat boy, hello diet!

Pelvic Anterior Lift
This seems worthwhile, I do think I have problems with my posture, would be good to correct this as shown here

Forefoot strike while running
I have been a very lazy runner, and my heel strike is putting a lot of stress on my joints. If I can learn to run on the balls of my feet I can reduce this impact.

I think the best resource I found was this youtube video (have I gone completely mad?). It has 2 surgeons talking about non surgical methods of treating this affliction. Worth the time to watch-