A lot has been written about the race we did a couple of weeks ago, and I’ve read every word- promise! A recurring theme has been people waking up the next day, or week and thinking ‘I could cut an hour/2 hours etc off my time’

(Just in case my wife reads this- it doesn’t mean I’m planning to do the event again next year, I’m doing this as a mental exercise -OK?)

So I got to thinking- what could I do to 5 hours off my time? And the answers came in a flash-

OK this is obvious, but no matter how much I change other stuff, some more effort is going to have to come out of me. I might have to get a Jens Voight ‘Shut up Legs‘ T-Shirt, but moving those pins faster will get you part way there. Let’s do the calculations below…..

For the time I did (18 hours 39 minutes) I think I pretty much nailed the nutrition. However the one time when I really crashed hard was EXACTLY the same place for lots of other people- during or just after Nellie’s Glen. Here’s what I found- using a carb calculator I figured I would need up to 40 gels during the race. You don’t need to be a rocket scientist to work out that you’re going to be really sick of gels by then. In fact for about 40km the thought of having a gel made me feel sick. I had them anyway, and didn’t chuck. It was also really obvious that getting substantial protein onboard helped a lot. Boiled eggs (shelled) were really good for me, but I had more trouble eating protein bars. I tried 2 types- Musashi Growling Dog Bar- Berry flavour are pretty hard to chew on the go, and even harder to swallow with a dry mouth. I even cut up 2 of these before the event and put the pieces into sandwich bags, but never got a chance to eat them. I had a whole one at CP4, and it really helped. They have a whole bunch of amino acids that seem to give me a good buzz too. I also had a couple of Atkins Protein bars, mostly rice bubbles held together with flavouring. These were ok, managed to eat a couple, unfortunately hard to swallow when puffing hard uphill, and little bits kept escaping from my mouth, not pretty! So I need to find a small, protein rich product that can be eaten on the go…. any suggestions?

Also I think I’d be better off finding a caffeine free gel- the Endura ones are ok but I’m very sensitive to caffeine. I would prefer to be able to chug down a coke or a coffee at some point during the race and ride that for a while rather than get to the end of the race acting like a zombie with a finger in a light socket. 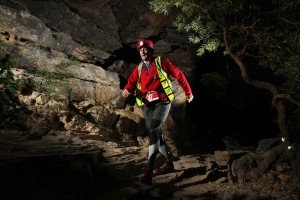 I didn’t think of this until a running buddy told me about her cunning plan. If you have all of your mandatory gear in a dry sack, it can easily be transferred into another bag at CP3. You can have the bladder full, pockets full of snacks, and just transfer the dry sack as you come through the checkpoint. Support crew remove the rubbish from the old one, re fill the snacks and bladder and give it back to you at CP4 etc.

I had some pretty nasty blisters by CP2 in this race, and it was all because I hadn’t given enough thought to my feet. Over recent times we’d been doing marathon type distances every weekend and I had not been having foot trouble, so I was focussing on becoming leech proof, which was a mistake. I’m going to be trying Injinji socks, so I hope they will help. Trailrunning is pretty harsh on socks though, and good ones cost a bomb! I would put large Compeeds on the base of my foot, just below the toes to prevent this blistering in future. 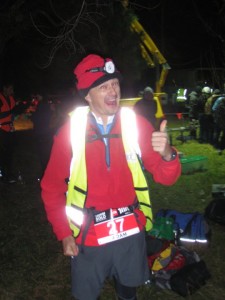 I found out at the last minute that there was no bag drop for CP1 and CP2, so I carried the stuff I thought I would need. This included about 20 gels, which nearly lasted me the whole race! Plus some sandwich bags full of Endura powder, most of which were never opened. It turned out to be more difficult than I had anticipated to empty the  powder into the bladder mouth, so I think I would need to

1. Find a better way of storing and pouring or

3.  Just use water and get my nutrition from food

I’ve been told that the optimum temperature for running a marathon is 3 degrees Celsius. Temps hovered around this number during the race so I don’t think we can make any gains here, only losses!

I figure I have to put more in to get more out- we maxed out at around 85km per week, and rarely did more than 65km per week. I figure a sub 14 hour time is going to have to include bumping up the km to a max of 120 in a week. Ouch.

I don’t really know how to deal with this- I don’t want to cancel Monday or Wednesday nights- I really believe they work well for me. I could potentially add 10km on to each of these runs before or after, but is that just adding ‘junk km?’ I can also add the Thursday night club run which is up to 16km, and I guess add a 20km ‘recovery run’ on Sunday to get used to running on blasted legs. Does anyone have any opinions on this? 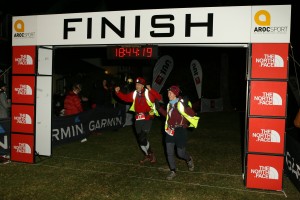 Most of this is pretty speculative, but I do have hard figures about how long I spent in each checkpoint so I’ll chuck some numbers around and see what happens.

How long at each checkpoint?

Looking at my best stops, I actually had time for a wee at CP1, and time for food, a chat, and clothing adjustments at CP5, so I feel it’s perfectly reasonable to expect to cut down the other times. If well organised, a 10 minute transition is easily possible, giving me savings of (137-50= 87 minutes). Hmm, not as much as I thought, so now I still have to find another 3 hours 30 minutes of savings! Martyn Dawson, who had a very experienced triathlete as his crew, managed the supported stops in 8, 11 and 7 minutes respectively, which proves it can be done.

I’ll speculate that if I can find good non caffeine gels, easy to eat protein bars and pre peel my eggs, I might save 15-30 minutes. This isn’t because of efficient eating, but my hope that better nutrition will also help me to run faster, more consistently with less flat spots. Total savings 87+30= 117 minutes.

Second bag of gear- I’ve already taken nearly 90 minutes off my time for speeding up transitions. I know that experts (see below) can nearly halve the time taken again, but can I claim anything extra here? Probably not. No savings

I think the foot care is worth 30 minutes, simply because being able to put your foot firmly on the ground and not wince when you step has got to be worth a few seconds here and there, and over such a long distance….. total savings 117+30 = 147 minutes

Weather. No savings to be made here. Total savings 162 minutes

Let’s try this another way. To aim for a sub 14 hour time, we should actually pick a number that is a bit lower to allow for things to go wrong, and a bit of slippage. The closest runner that I know of  would be Sebastian Perhauz, who finished in 13:36. Perfect! These front guys seem to be able to transition in about 4 minutes at the fastest, which would save another half hour if we were able to replicate it. Sebastian got to CP2 in just under 4:20 which is almost exactly 1.5 hours before me. It makes sense that about 40% of his time advantage comes in the first 40% of the race. Let’s look at his other stats.

OK, forget the stats. If I’m going to finish in sub 14 hours, I guess I’ll need to be about a 3 hour 20 marathoner. We will see how close I can get in a few weeks when I do the Gold Coast Marathon, my current pb is 3:55 for Canberra, I believe another 6 months of hard training would get me close, but is it worth it?

Is it possible for a new runner to beat 14 hours? I’d say yes, but unlikely for me as I’d have to pick up about 250 places in the race to be sub 14 hours. But I also wouldn’t bet against me as in May last year I’d never done a half marathon…..

Postscript: I didn’t really get to the point here which was this- If I can save half of the time I need by simply being smarter, then I have a much easier task in training- I now only have to get about 20% faster in my running rather than >30% faster if I assume the whole difference has to come from fitness. I also forgot to acknowledge some other inspirational runners whose writing I’ve relied on a lot for info about this crazy sport.

Have a read of Nick Wienholts Enduro Explorer website

And Ian Gallagher, who I sometimes see at training as he breezes past

Also Andy Bowen, who I met for the first time at TNF100 and is a great bloke