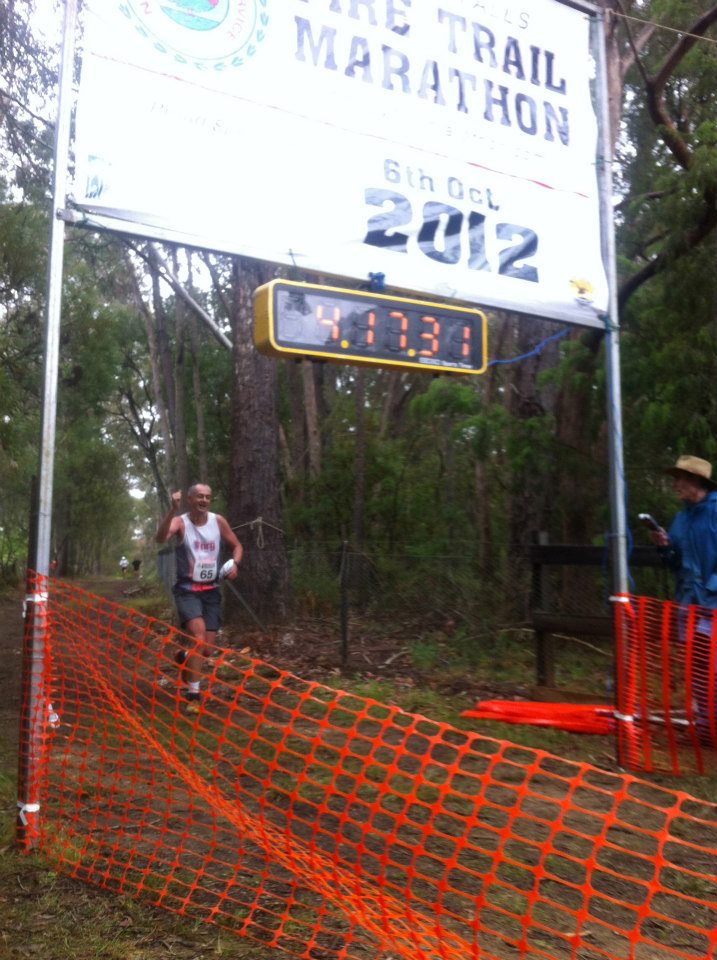 Thanks to Doug Richardson for this photo

I’ve just had one of those magical weekends that will live with me for a very long time. So if you hate happy stories, don’t read on! We drove down to the Southern Highlands on Friday night to stay the weekend with our friends, who run the Sutton Forest Inn in er, Sutton Forest. Now I don’t consider myself a big drinker, however it is difficult to stay in a pub on Friday night and not have a beer!

For Paul Hilliard (one half of the pub running team) and Sarah Connor (my wife) it was to be their first marathon. I’m not quite sure why the both chose a race billed as ‘NSW Toughest Marathon’ as their first, but neither of them are people you want to argue with once they’ve made up their mind. I hoped that this quality would help both of them during the race.

I’d done this race for the first time in 2011, but I’d had a touch of man flu and as a consequence of not feeling well, had relaxed the ‘no drinking before a marathon’ rule. Bad mistake, and one I won’t make again. I took it easy (no choice really) and finished in a decent 4:50 which gave me one of 6 Six Foot Track qualifiers for the year, but not a good one……

Friday had been horribly hot, but the forecast was for a cool mostly dry day, and that’s how it turned out. Beautiful running weather!

My marathon virgins were extremely nervous, but I know it’s just wasting energy to tell people not to worry. Far better to get their minds busy thinking about the race and strategies, tips and options. The downside of staying in a pub on a friday night was that it was difficult to sleep with the band going downstairs. The upside was that the band were pretty good.

Up early for breakfast and off to the start. It was great to see so many of the same people as last year, strange that I didn’t know any of them 12 months ago! I spotted Michael McGrath sporting a pair of runner held together with MASKING TAPE! So I lent him my old road shoes- yes mine were just about ready to be donated to underprivileged international joggers, but still many times more useful than Mikes clogs. Did he steal them from a homeless man? No he’d forgotten to bring his proper shoes. Lots of smiles, good wishes and then we all lined up behind the start line, aaand we’re off! The start is tight and downhill until the first creek crossing. Last year this was muddy and we had to run through the freezing water, this year dry and we got across with dry feet. I got into a nice rhythm, although a bit worried that I was going out too fast, hitting 5-5:20/km. However I felt comfortable and I know I’ve picked up a bit of speed lately so I figured I’d be ok. After about 10km I noticed that I’d been dicing with a lady, blazing past her on the downhill and getting slaughtered on the uphill so I caught up with her and had a chat. Turns out I was chatting with Pam Muston who was training for her 3rd Coast to Koscioszko race, the 240km epic run every December. I asked her what time she was aiming for and was told around 4 hours, I said ‘I’m definitely going too fast!’ and let her go. So what were my goals? I was fairly sure I could beat 4:50 from last year, so I was looking for

Pam had put the fear into me about the hills in the second half, but perhaps I shouldn’t have listened to her as there isn’t anything that would be classed as a hill to a Six Foot Track survivor. Michael McGrath caught up to me at around 20km (I thought he was way in front) and we passed the halfway mark at 1:59 so it was a great position to be in, still worried I was going too fast…… The course has a couple of out and back sections which gives you a great opportunity to see who is in front on the way in, and see those behind on the way back.

At about 24km I saw Sarah and Paul looking relaxed and happy. From about 22km until 34km I ran with a Striders runner called Peter that I’d been dicing with for a while. He was bombing the downhills but virtually walking the uphills so I thought we could help each other and smooth out the consistency. We had a great chat but by 32km his lack of training was showing and he was having trouble (his marathon pb was more than half an hour better than mine, I’m not trying to talk myself up!), I hope I wasn’t pushing him too hard. At that point I’d realised I was likely to beat 4:30 and was anxious not to let the opportunity pass. I told Peter that I was going to try a bit harder and pushed the pace up a bit. As the km’s counted down I saw a few people on my tail and hoped I could outlast them, luckily I still felt good although the tiredness was starting to bite. It probably means I didn’t run hard enough while I was with Peter, but on the other hand not busting myself on that section could have saved me from breaking early…….

In the last 3km I realised I could beat 4:20 if I kept up the pressure, those last few steps seemed to go forever and I knew my Garmin was reading slightly long- even though ths seems to be a magically accurate course. So I came through the gates at 4:17:25 having blown away my most optimistic goals and knowing I could have gone a bit faster. Happy doesn’t even begin to describe my feelings! (official result of 4:17:32 differs by 7 seconds because this race does not have timing chips, i.e.. they work on gun time so it must have taken me 7 seconds to cross the start line which is where I hit start on my Garmin)

A note about nutrition. I have recently been experimenting with making my own energy gels and this was the first time I had used them during a race. That worked out very well, I never ran out of energy and felt good during the race. More about that in another post.

We were getting close to the 5:30 time limit but I was a little worried- we sent a friend out to push Paul to the end and I ran out to collect Sarah. It was very difficult to see her in that position and I knew that I couldn’t help her by taking her pack, and I knew we only had a couple of minutes to beat the sweep. So I simply tried to reassure her we were close to the end and to keep the legs ticking over. Success! Sarah in 5:25 and Paul in 5:27

Apparently she’d had a dose of the ‘tired sillies’ while running and started singing ’99 bottles of beer on the wall’ and Paul told her to shut up! Then after crossing the line she said ‘that was definitely harder than giving birth!’ Does that mean if I cut out some running we can have more babies?

Back to the pub for beer, wine, champagne, cider and spirits. Of course I avoided fortified wines, are you crazy? That’s a recipe for a hangover……. 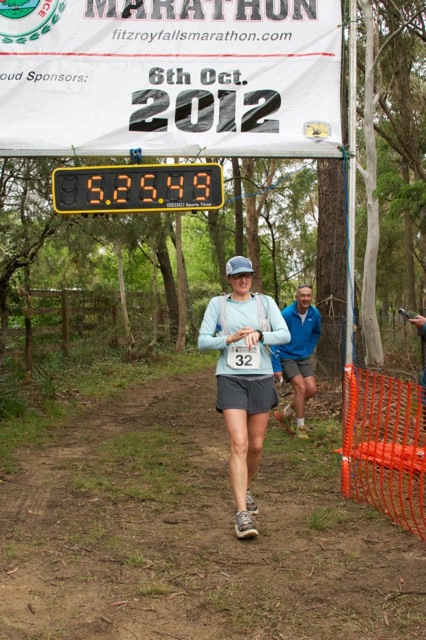 If you’d like to read last years report, check it out here