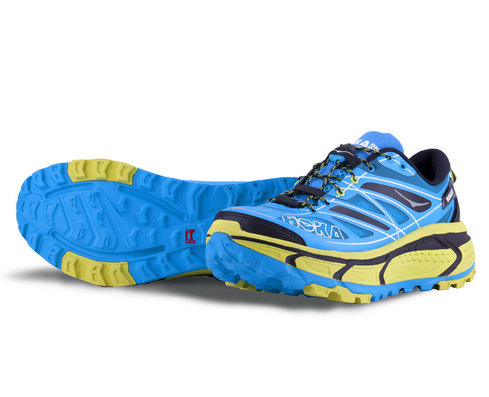 I’ve never done a shoe review before, so please excuse me if some of this doesn’t sound ‘right’. I do however hope it is all ‘correct’!

The shoes were kindly supplied by Northside Runners, they didn’t ask me to write a review but I thought it would be cool since they’ve been so nice to me. Also just because I have a wall full of Hokas don’t think I’m incapable of being brutally honest- I’m really just trying to be impartial, and yes some of it may be uncomplimentary.

But not this time!

The Great North Walk 100s held on the weekend of 13-14 September this year are billed as ‘Australia’s toughest trail races’ and I don’t know if that is true, but the 100km (actually 104km) and the 100 miler (actually 108 miles or about 175km) are pretty damn tough. The trail goes through some beautiful but very unforgiving country, and towards the end there’s  lots of sandstone rocks which can shred shoes and the sheer distance can make mincemeat out of your feet.

It had rained a fair bit before this race and I knew that I needed loads of grip as the trail was likely to be very muddy in parts. As I contemplated the shoe wall I realised that both pairs of Stinsons were getting a bit flat on the bottom and the Mafate 2’s that I had bought cheap last year were just a touch too small for such a long distance race (I’d worn them on the Larapinta and had lasted 3 days before switching to the Stinsons). Obviously the answer was more shoes (as Imelda herself would say)!

I spoke with Michael Delgarno and suggested the Mafate Speeds or the Altra Olympus as I really like a wide toe box, but his advice was to go with the Hokas because the Altra is a zero drop shoe and would require a bit of adaption. He didn’t bat an eyelid when I suggested I wanted to wear brand new shoes for a 108 mile run, good man. It also meant that I would be safe from Roger Hanneys voodoo dolls, at least for a while…….

They ordered in a size 11 and size 11.5, and when I went in to collect them it was immediately obvious that the 11.5 were the winner. Nice and roomy down front and possibly a little less wide than I would like, but these are currently the widest shoe in the Hoka range. I also treated myself to a new pair of Injinji Trail 2.0 socks for the adventure.

So, how did they go? They felt awesome. I’ve never had so much confidence flying down muddy tracks or climbing up ascents with dodgy grip. More than once I was saved from getting wet feet simply because the foam is so high- as I sank into the mud the water couldn’t get into the upper! 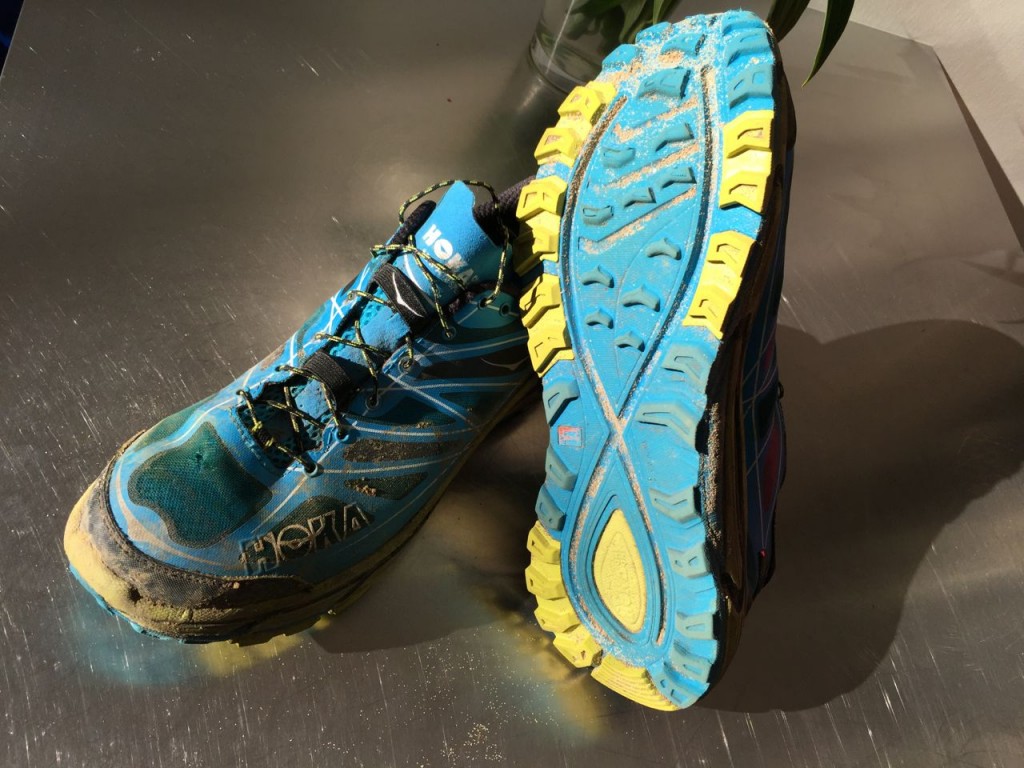 They did bleed a bit of colour on to my feet, I looked like I had bruised feet after the run. And it took me a couple of goes to get the tongue settled on top of my left foot- it had a crease in it. However this is probably just a symptom of being a new shoe.

And yes, I did have to stop and tape up my little toe, which was bashing against the side of the shoe. Relief came immediately but I’m not marking the shoes down because of that- if I’d been sensible I would have taped the little toes before wearing them for such a long race. There is such a thing as being TOO cocky!

The ride is a lot harder than the Bondi’s, somewhat surprising for a shoe that unashamedly rocks the maximal look. But with a good pair of socks they feel like weapons ready to go to war with the trail. I wanted to compare with something different so I strapped on a pair of Salomon Speedcross 3’s and headed out for a little run this morning. The tongue felt enormous and it took my feet a little while to get used to them however I’d definitely put it like this- Speedcross is a good alternative for any fast gnarly run under about 45km, and the Mafates for anything else.

At the end of the race they still looked 7/10, which is better than I could say for the rest of my body. They have a small hole in the top of the left shoe- I must have dragged it on some rocks. A bit disappointing however not a big deal. They look great for shoes that are nearly 30% through their working life after one race, I think they will last really well. The grip is extraordinary, I think I might be the only runner who didn’t come close to falling over in this race, yes there were some epic spills! OK smartarse, I’m aware that 7/10 and ‘30% of their working life’ doesn’t really inspire confidence, however if I would wash the shoes (or at least rub the dirt and sand off) they’d be an 8/10. Humph.

Now if you think I’m being a bit down on these shoes, let’s take a step back and look at the facts- they had enough cushioning to enable me to complete a 175km run with very few issues. The only blisters I got were in places where I forgot to lube my feet. Yeah, I’m that dumb. They stopped me from sliding around like 90% of the field and prevented me from getting wet feet more than once. They didn’t get too hot, and the terrain didn’t chew them up as much as expected. I’m a fan.

These are not perfect- I would still like 1-2mm more width in the toe box, and perhaps a more hole resistant toe cover, but they get very close. If you need some gnarly trail shoes, you should consider these. I’m actually looking forward to using them at Hume & Hovell.