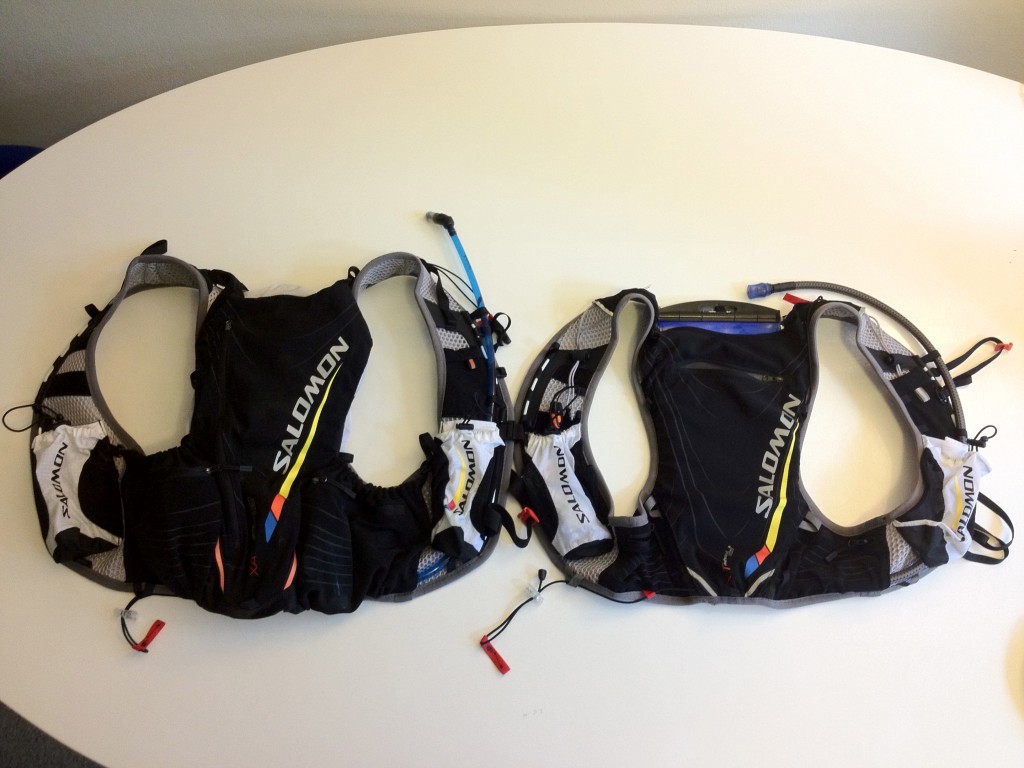 I’ve owned the 5 litre version of this pack for some time, but there’s enough differences to make a review worthwhile. The ’12’ in the description refers to the load capacity of 12 litres. Well, I can tell you that there’s bugger all chance of fitting 5 litres of stuff into the ‘5 Set’, and no way to fit all of the mandatory equipment for The North Face 100.

The 12 Set looks much more like it will fit everything. I used a Salomon XA-20 in 2011 and it easily fit all my gear. I’m becoming much more of a ‘weight weenie’ this year in an attempt to make my race a bit easier. Paradoxically, both the ‘Skin’ packs seem to weigh more than the XA-20 but they are much easier to carry on long runs. A note about the name- I took the name of this post directly from the Salomon website, but have a look at the url- it’s really called the ‘skinbag 12’! That’s a much better name….

The 5 litre has one zippered pocket on the back that can hold a mobile phone, wallet and a few bits and pieces. The 12 has more pockets, and the outside one has a zipper that goes down the side as well, allowing you to open it up completely. Another difference is that the lower side pockets that are difficult to access on the 5 are a little easier on the 12. They also have a large ‘bin’ on each side where these pockets are. There’s a closure system whereby you can pull a string to keep things inside, and a handy pocket to insert the excess string so it doesn’t get in the way. I’ve done a long run with a 500ml collapsible bottle in each side and barely felt the extra weight. At a rest stop, I removed each bottle and dumped the contents into the bladder, then rolled the bottles up and put them back in the side pouches. Worked like magic. 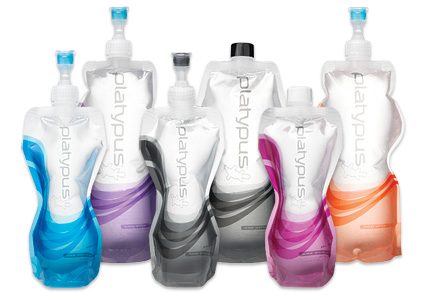 The pockets on the front are good for storing gels, but I’ve found that sharp ones can poke out the side of the thin mesh and scratch your arms on long runs.  One other very good but poorly executed detail is the spare pockets that attach by velcro to the front left hand side of the pack. Two are provided, but there’s only one spot to attach, so you can pre fill the other and slap it on at a checkpoint for a quick fill up of whatever will fit in it. Or alliteratively you could put something like a phone in it and switch packs- to move your phone across just rip it off one pack and slap it on the other at a checkpoint. Oh, look, it’s about the same size as an iPhone……. but no, an iPhone doesn’t fit! No, I don’t really have 2 iPhones, or the need to swap mid race, so I suppose it’s not really a design fault. Might be best to put the gels there, but they aren’t quite as accessible- salt tabs? Ventolin?

Both the 5l and 12l nominally have a 1.5l bladder. I have an early version of the 5l which comes with a ‘Source’ bladder. The Source will actually take about 1.7l, the closure is decent, it comes with a quick release tube which is insulated. The tube has great flow and doesn’t add taste to the water. Unfortunately it has started to leak, and based on photos of the leak, my supplier has asked me to return the bladder. On the other hand, the 12l ‘Skinbag’ has a Hydrapak 1.5l bladder with strict instructions not to overfill. It’s closure is great, easy to use, but we’ll see when it’s as old as the 5l- it was easy at the start too! Unfortunately it added a nasty plastic taste to the water, the (removable) tube is non insulated and the valve won’t flow as much as I need. Bottom line- the North Face 100 requires the ability to carry 2l of fluids, so I’ll be looking to swap this bladder for something else. Update- another runner (Geoff Evison) has purchased a couple of 2 litre Hydrapak bladders that will apparently fit into the pack. I tried the ‘Source’ bladder from the 5l pack but the 12l pack seems to have a narrower opening- you can’t get it in when really full, and it isn’t easy to swap out. 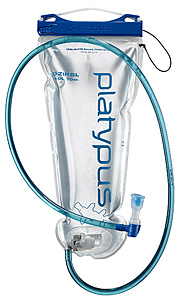 Update 2- I bought a 2l Platypus Big Zip SL and it fits really well into the Skinbag 12. I think I’ll buy another one for the 5l pack and ditch the ones they came with. It has a nice high flow valve too. the only issue is that the tube exit is on the wrong side of the bladder- I’ll have to get a ‘U’ shape piece of pipe to modify the outlet. I think I’ll have to forget about swapping bladders mid race- it’s too hard to remove and re fit when there’s other stuff in the pack. It will be best to fill from bottles or fill the bladder while it is in the pack- and now a bit easier that the Platypus stick out a bit further. And it now means that I can meet the requirement of being able to carry 2l of fluid for the North Face 100. 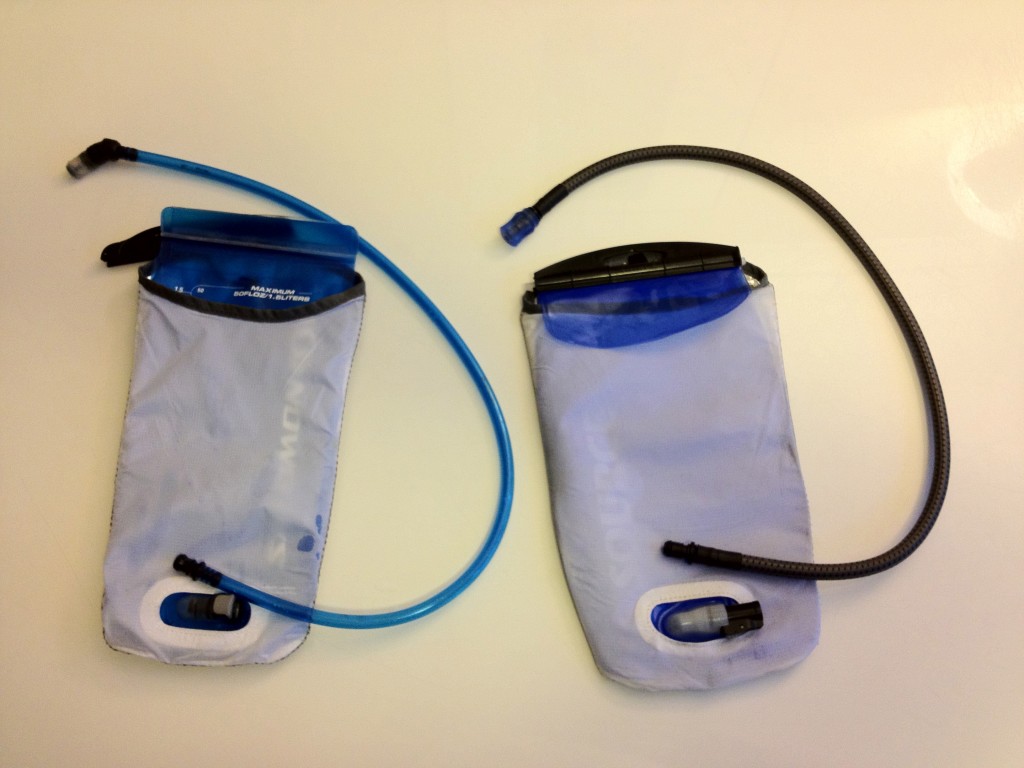 Also the pack is a multi purpose adventure race pack, and includes a bunch of elasticised ties hat Salomon call their ‘4D’ attachment system for ski poles etc. I personally don’t like having things attached to the outside of my pack, it costs energy to have them bouncing around, and even a soft item can get very annoying if it hits you for hours…… I’m going to investigate taking these bits of elastic off, or at least tucking them away. Surely there’s an aero advantage there? No?

Overall I love both packs, they’re pretty close to perfect for trail running. It’s obvious that  people with lots of experience had a hand in creating them.

If you’d like to know more, have a look at the review by the Ultra168 guys at-