When the race was officially cancelled, my first thought was to miss going to the Blue Mountains that weekend and instead go to my best friends son’s birthday in the Southern Highlands. However I figured that since the room and meals were paid for I might as well get some value out of the weekend. Glad I did, because the weekend turned out to be a fantastic time, and also because our car broke down, preventing my wife from going to the 5y olds party…… 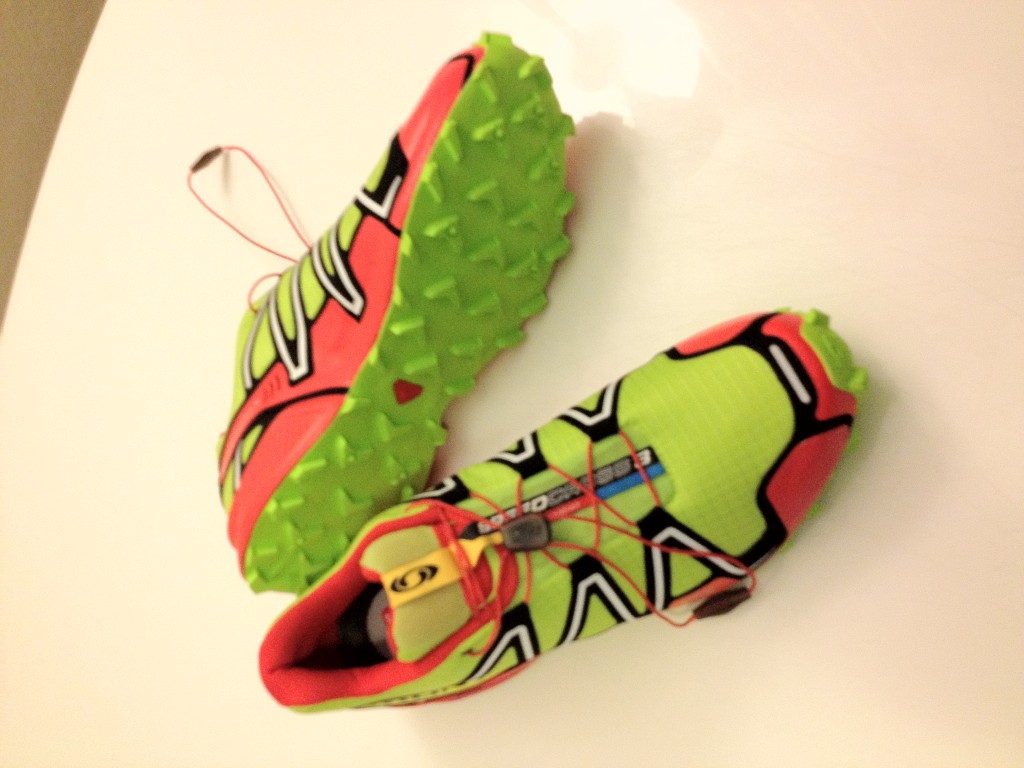 We arrived in Katoomba about 2:30pm on Friday, checked in and I had to do a small job for a client, then it was off to the pub. It was at this point that my weekend became a little more challenging. Not mentioning any names, but the conversation went like this-

Martyn Dawson ‘if you do it I’m doing it’

I think you can guess what happened after that. So we went back to the YHA and booked the bus back from Cave’s House at 3pm. Lady behind the counter knew exactly what we were up to, and was a member of the Bush Fire Brigade. She was at pains to tell us that the Vollies would never call off the race no matter how much danger there was. And I replied that I felt the correct decision had been made and I wasn’t looking for anyone to blame- I’d hate to be a race director!

Mere minutes later one of the committee members from our club sat down opposite me and said ‘So you’re running Six Foot tomorrow….’

Our cover was blown- turns out we hadn’t told the YHA lady that it was a secret and she’d asked this person to give us the receipt for the bus trip. D’oh! Luckily he knows how to keep a secret and we agreed that it would be bad if this information got out. 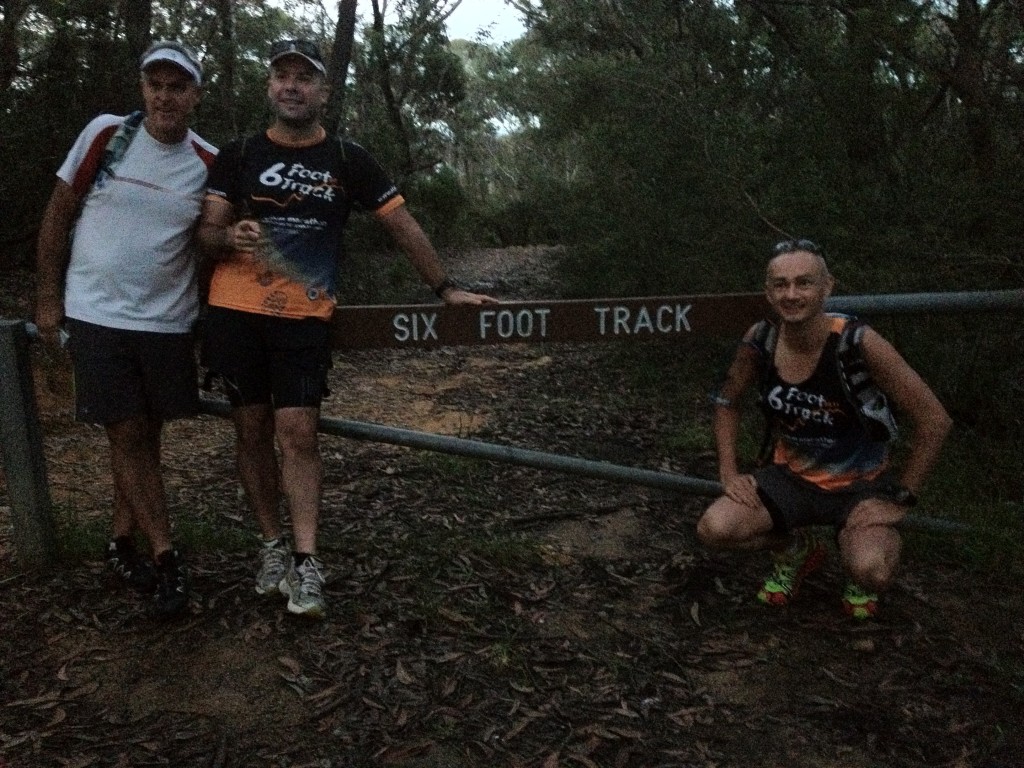 So at 6:44 on Saturday morning someone shouted go and we hit ‘start’ on the Garmin. It was nice not having to elbow people out of the way in the first few hundred metres of fire trail, and the trip (sorry, run) down Nellie’s Glen seemed normal- that is wet but not dangerous. The single track after that was sloshy in places, but much better than I’d expected, I actually managed to keep my shoes mainly dry for about 10km.

It was fantastic running along the fire trail in the first section- sun just coming up, nice crisp air and good company. Until the bastards got me lost. I mean honestly, those 2 guys have more than 10 Six Foot Tracks between them- how could they just let me run blithely up a road and miss a bloody great sign? Anyway, all sorted and a few minutes later we were crossing the first of many stiles.

Up past the blackberry bushes (no fruit this time) through a couple of gates and into the single track beside cox’s river. Wow, what a roar, the river sounds really angry. A few KM later we got to the suspension bridge, and the group who got past when we were lost had beaten us there, so we had quite a wait. I took some pictures, had a snack (bite sized pikelets FTW!) and had a bit of a stretch. 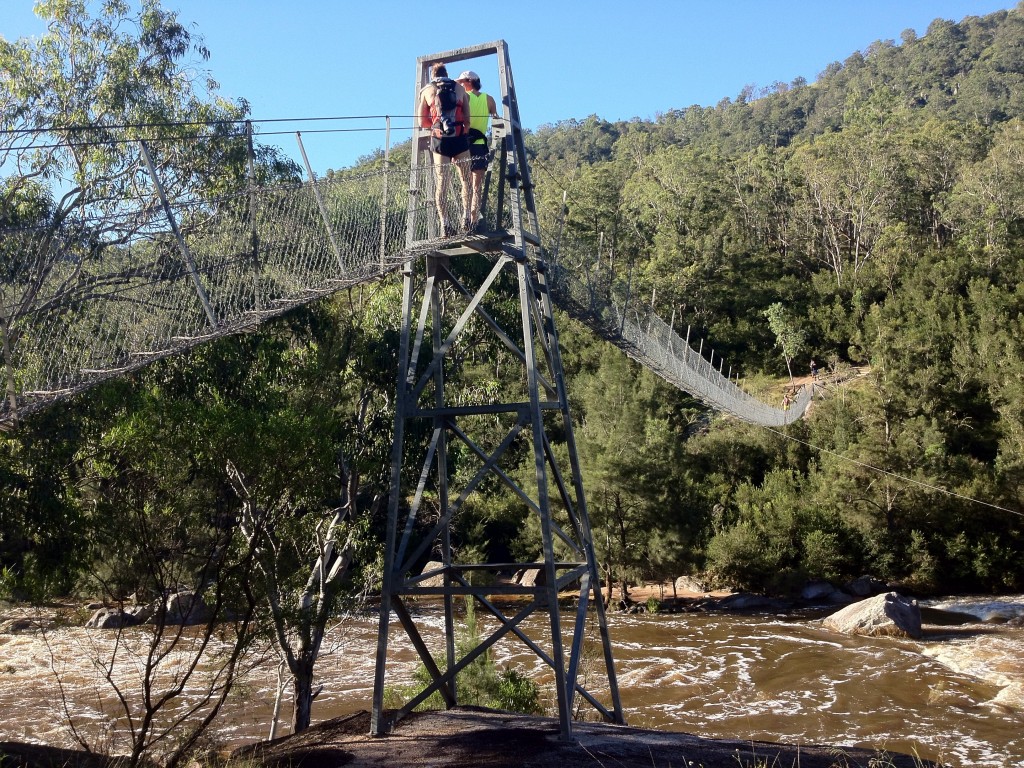 The bridge is scary. If you’d told me it was 15km and back over the bridge, or 50km to home I would take the non bridge option. Then we ran around to Cox’s campground, took some photos and video, refilled our water and continued on. As you can see in the video here the crossing point that would have the rope stretched across was flowing quite fast, and based on that I’d say you could not guarantee the safety of all runners. I know quite a bit of discussion has been happening online but it’s all armchair speculation- the correct decision was made to call the race off.

As usual, the first water crossing along the road up to Mini Mini Saddle was unavoidable, and a little bit deeper than I’ve seen before. I struggled up Mini Mini which was a bit of a slap in the face after all the hill training I’ve done- and of course this had nothing to do with the beer consumed the previous afternoon….

Regroup at the top and a bite to eat, then off down to Allum Creek. Spotted some trail bikers (well they were hard to miss- the bikes make an incredible racket) they warned us that the creeks were well up, and off we went again. There’s a couple of creek crossings in this section (sorry can’t name them) and true enough they were at knee height rather than normal ankle height. No big problem but they were flowing quite fast, you had to be very careful where to put your feet. 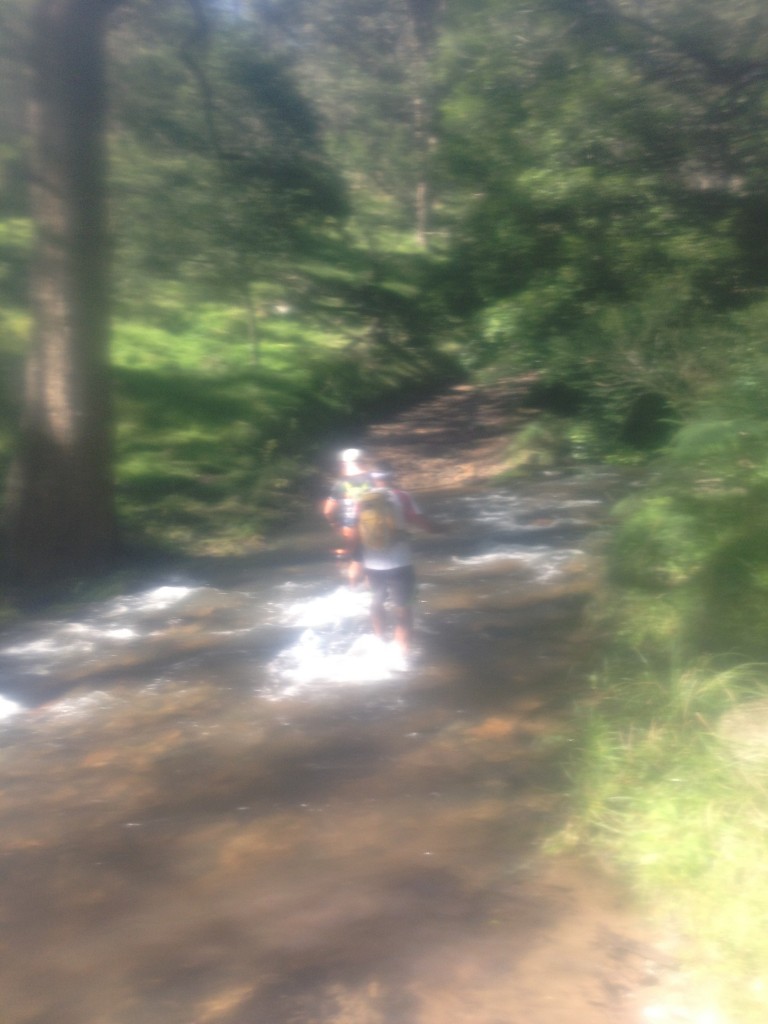 Up the Pluviometer I fell into the same sufferfest hole as before, so I just tried to keep my heart rate down and not blow up. This meant that the others got several hundred metres in front by the top, but one of us had developed a groin strain. I was feeling good and pushed on Black Range Rd to the Deviation and waited for the others in the shade. Soon we came upon an unofficial drinks stop for the Berowra Bush Runners, who informed us that there was water at the camp ground just around the corner. The tank was in shade and it was glorious fresh tasting and cool. We met another couple of runners  here and ran with them off and on till the end. After the road crossing I was bitten by some angry wildlife, but the rest was uneventful. Our injured mate was begging us to ‘p@ss off and leave me to die on my own’ which of course we couldn’t do, but with only 3km to go and wanting to try out the steep descents with my new Salomon Speedcross shoes I took off. I figured if he didn’t turn up I could probably have enough energy to go and find his body later. Last year during this section I was in agony- my whole body was rebelling and my quads were on fire. This year I felt in control, happy smashing the descents generally loving the energy that I’d lacked earlier!

Coming down the final footpath/ steps there were a lot of tourists, but I didn’t get too many filthy looks- one little girl asked why I was running so fast. Say that again please kid! Off the steps on to the driveway and about 20 people cheered and clapped! The buggers made me run down to the stop sign though. I took off my shoes and socks and washed them out then gingerly walked up to the cafe to wait for the others.

In they came. Martyn to sore to bend down and remove his shoes, Michael keeps running- he wants to do an extra 4km to make an even 50km for the day. I have extremely high regard for Michael, but he is a crazy as a bag of snakes.

Colin Jeftha, the Six Foot Track Race Director was at the finish, and as soon as he heard that I had video of Cox’s river, he rushed over to have a look. Everybody was reassuring him that he’d made the right decision to cancel the race, but it was obviously a heart wrenching decision for him. One person did ask him about the sinkhole that prevented drink stations being set up, and he replied that the big sinkhole was on one of the access roads, not on the Six Foot Track. He was really pleased and touched that a number of people had chosen to run despite the cancellation. You can imagine that as RD he can’t support those runners publicly, but it was great to see him in a non pressured context. I have previously thought he was a bit of a bastard sometimes, but let’s face it- he’s a guy who is placed under enormous pressure for very little reward simply to provide us with a safe and enjoyable race. I have really changed my mind about Colin, I think he is tough but fair, and I won’t be asking for my money back for the race. I’d still kind of like the shirt though……. And no way do I want to be a Race Director. Ever. 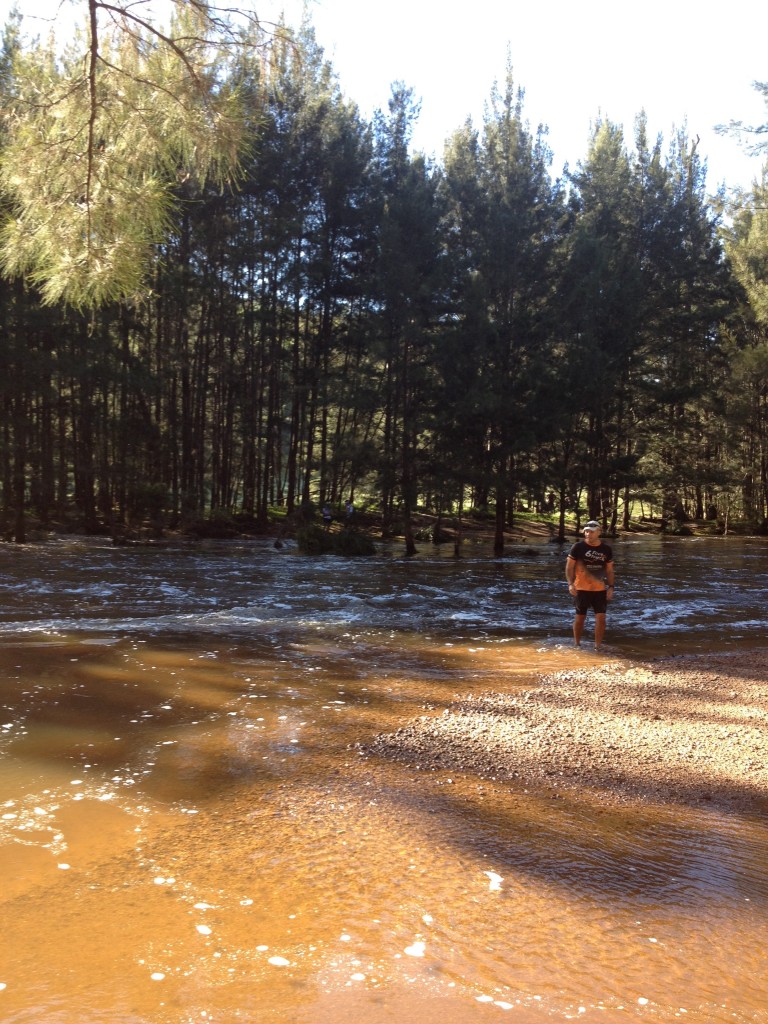 By dinner time word had spread that we had done the run, and here’s the answer to the question we were asked all night-

Why didn’t you take me?

If we’d told anyone, word would have spread like wildfire and everyone would have wanted to go. It would have not only ruined all of Randy’s hard work on a backup plan, but it would have become unworkable. We couldn’t involve any of the committee, we couldn’t ask anyone faster, or slower. Michael, Martyn and I have run hundreds of km together and know each others weaknesses and strengths very well. They weren’t concerned when I was dragging my arse up hills, just as I knew our injured runner would get home because he’s a tough bastard. We couldn’t take any newbies for similar reasons- it’s an extremely tough run which is why it’s so iconic.

How did we go? Well, if we hadn’t been lost, we would have just beaten the sweep. All the extra time we took with photo ops, water stops and waiting for the bridge put us in a bit after 2pm. You can see the Garmin trace here

How could you be so irresponsible and go when the race had been cancelled? Well, the track wasn’t closed, and in fact most of it was in very good condition. I only got muddy in one section of Black Range Rd, all the rest of it was as good if not better than normal conditions. The reason the race was cancelled was concern about getting the worst runner across the river, and being able to set up drinks and first aid. We didn’t cross the river that way, and we were completely self supported. Here’s another reason we were a bit slow- this is a list of all of the stuff I carried on the day- remember this is just me, the others had lots of gear too- 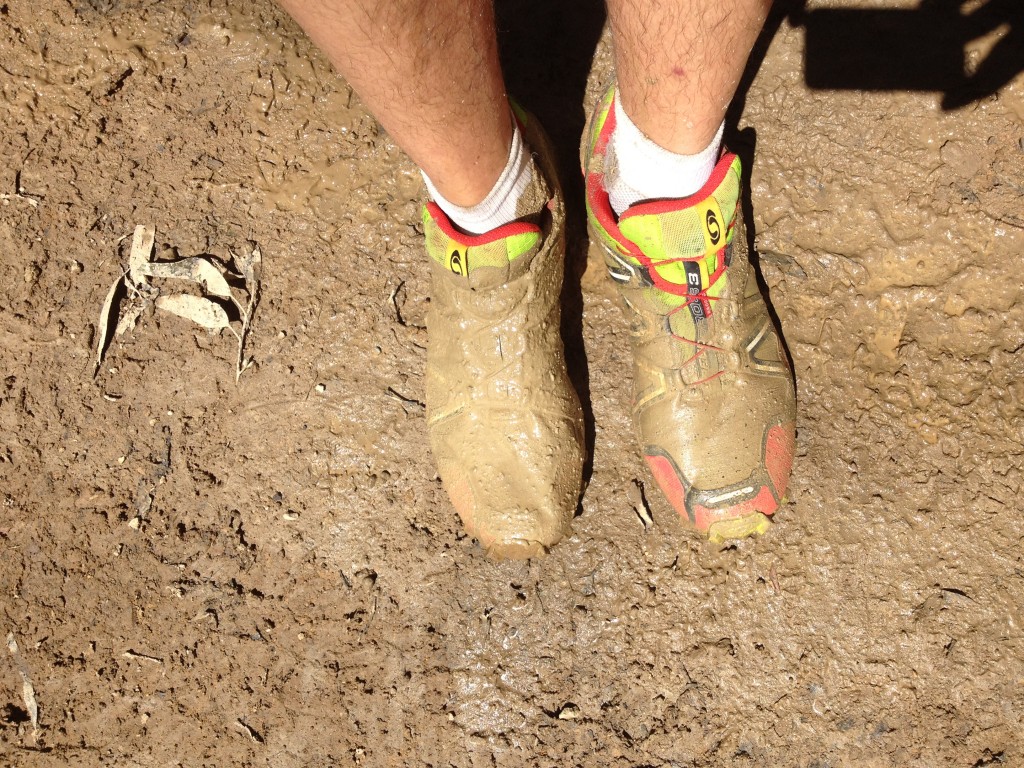 And it was great to party with everyone at the hotel Gearin on Saturday night. For such a healthy bunch, you guys really enjoy your booze!