I love races in the southern highlands because we get to go and visit our friends Alison and Paul Hilliard and son Jamie. Staying with them for the weekend was amazing, however I generally drink too much which isn’t good for my performance…….

So it was kind of fortuitous that coach had said ‘don’t run this one too hard, just use it as a training run’ which may or may not have meant ‘fill your boots, you borderline alcoholic’. Ahem.

This meant that turning up on Friday night we got to say ‘Moet? I suppose it’ll do…’

A nice sleep in on Saturday (which is VERY rare) then a trip into Bowral for pies and a look around was fun, then home delivered pasta for dinner and well, cider, red, white and more champagne.

So you can guess I wasn’t overly impressed when the alarm went off at 4:50am, however I had pre organised all of my stuff and we had plenty of time to get to the start. On arriving we saw how impeccably well everything was set up. I shouldn’t have been surprised with April Palmerlee and Keith Hong  involved.

It was getting close to start time so we all assembled at the start for the race briefing, then we set off on the first of 2x 25km loops. I hadn’t paid much attention to the course description but I expected to be running a lot of fire trail. In reality there was heaps of single track all built for mountain bikes.

Jeez those bike people have it good! Luxury! When I was a lad we had to fight our way through undergrowth on indistinct trail and wade through knee high water. Oh No- these trails had gentle downs and climbs, loads of switchbacks and I was only slapped in the face by vegetation once- OK twice because it was the same plant on the second lap. I’d been a bit worried when April said we had a 7 hour cutoff however my first lap was over in 2:33 at an indicated 23.4km, so I could relax as I had heaps of time for lap 2. I don’t know how the course ws measured but I’d speculate that if it was accurately measured the difference would be because our Garmins did not measure some of the switchbacks due to the dense forest.

While it’s true that I wanted to quietly die in the first few km, my hangover quickly took a back seat to the lovely surrounds, it really was very pretty in parts. I got to have a quick chat to John Fan who had been pushing hard last weekend at Bilpin- I was certain he would beat me at SHC because I was simply enjoying myself and yes, slightly hungover. I met another runner named Adam (dude those calf guards need a volume control) and everyone was having fun. I’d seen Lise Lafferty towards the end of the first lap- she was having a difficult day and it was a privilege to help in a small way.

I came in to the start/ finish chute to the sound of Sarah and Alex ringing a cowbell- had a quick snog and went out for my next lap. I hadn’t had much fluid on the first lap so it didn’t matter much that the aid station wasn’t very visible to me as I came through. Really the race was very well provisioned but I missed the middle aid station on the first lap too! Not sure how this happened.

I settled in for the second lap, and was by myself for some time making sure I followed the ribbon. But all of a sudden a runner came along from a completely different direction so I slowed down to discuss. Neither of us could figure out who had gone the wrong way but our Garmins gave virtually the same distance so we agreed not to worry about it. I cruised around running some mental  calculations about finish time and realised I had slowed down by about 20% and was heading for a 5:30ish finish. For a little while I wondered if I should try to shave off a few minutes and go sub 5:30 hover that’s just a number, it was far more important to finish happy and uninjured.

I think the timing mat must have been dirty

Sure enough my final time of 5:35 was a bit better than expected but certainly not spectacular- I was in the top 30% of the field at Bilpin last week but bottom 30% at SHC! Oh well, the big one is in a few weeks (GNW), that’s more important…….

One of the best moments of the day was hanging around the Summit Sisters tent and chatting to Jo Brischetto and Brendan Davies- who made me all modest by mentioning the sponsorship deal with Northside Runners. Mate that beard is getting a bit wild, but it doesn’t seem to affect your running, best of luck in Doha!

As it turns out there was a whole bunch of NRG’ers at the race and I didn’t see any of them because they turned up after the 50km race started, did the 22km race and left before I finished!

Here’s a couple of photos from the 1km for kids- I think this is Alex’s first official race, and I’m very proud of him….. 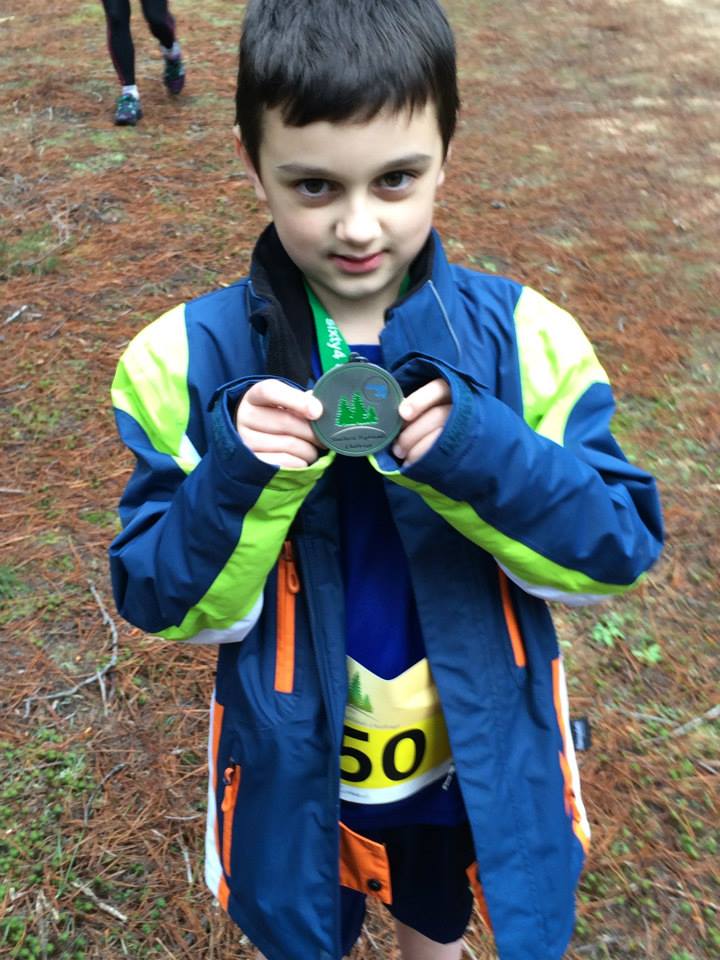