We rose at about 5am for the 6:30am start of the marathon. Breakfast and coffee and we all bundled into the cars for the short trip to Lasseters Casino which is the start/ finish. We set off while it was still dark, and the whole field (about 50 of us) started slowly drifting apart in the first few km. Of course I started to feel the need for a wee, and because I had read the briefing document I knew there was a toilet around the 6km mark. Unfortunately the drink stop people at 6km didn’t know where this might be- luckily it was just around the corner, a little sign directing us into someone’s front yard to use the dunny attached to their laundry……er thanks.

After 240km of running in the past 6 days, I was a bit worried about my ability to back up for another 42.2km in a decent time, so I’d pretty much decided to just beat the cutoff which was 5 hours, and with a vague target of 4:30. I set out at a pace I felt was comfortable and managed some fairly consistent 5:40 ish km. Of course pretty soon I wondered if I could keep this up for the half and go under 2 hours before fading. Turns out this was not too hard, I hit the half in 1:58. The next challenge was how long to keep this up for? I’d decided that I’d be happy with 4:30 meaning I could relax by about 25% and still make my target, but as the km started disappearing I wasn’t slowing down much, getting to about 6:06/km.

I figured if I was within a few seconds of a 4 hour finish by the time I hit 36km, I would pump out a few quick ones to go under that mark. This was also a bit stupid, because I have the Great North Walk 100s coming up in a couple of weeks and can’t really afford to kill myself chasing a time. Oh well, it wasn’t to be- I was pretty sure Jane Trumper would come breezing past me, and sure enough she did at around 37km. I was happy to have held her off for that long and watched her move off into the distance, and she’d mentioned that she was running 3rd female and could podium if she kept going. Well of course she was going to keep going!

I caught a couple of guys who were flagging badly in the last few km and encouraged them to come with me. Neither could, but strangely this gave me a big boost and I started putting on a bit of a dash- my final km of 5:16 means I probably could have gone under 4 hours for the marathon, however I’m still very happy with the result of 4:04:56.

Janet and Garry got us to the airport and I raced off to the Qantas Club for a shower and some food, (I hope they didn’t count how many rum & cokes I had) and we had our hugs and got on the plane for the ride home.

As it happened, Jess Baker and Meredith Quinlan were on our flight too- they’d just finished running the Larapinta Trail as well and had gone 21 minutes under the record for a time of 59 hours something. Which just goes to prove that no matter how crazy you are, there’s always someone crazier. 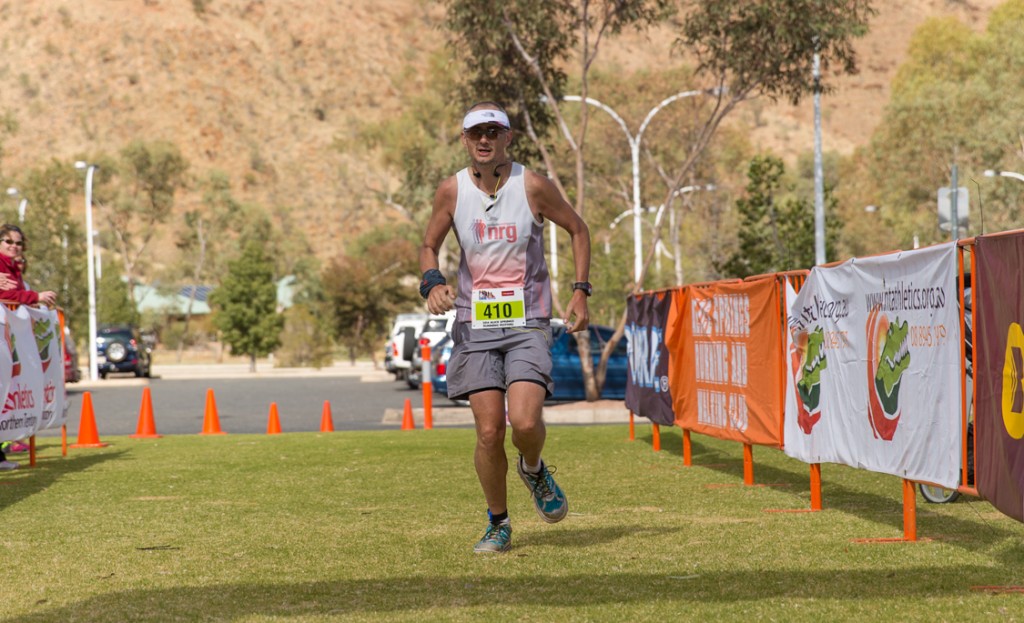 Thanks to Lisa Hatzimihail for the photo