(Adam Connor) I’m very pleased that Kirrily Dear has agreed to share her experience at the Big Red Run this year. As the first ever guest blogger she has some interesting things to say, it’s a pity it has taken me so long to post this. She’s done some great writing and I might ask to host some more of it- including her incredible multi day epic out on the GNW. I have to add that I wasn’t really interested in this run until I heard about how much fun it was afterwards! Take it away Kirrily……… 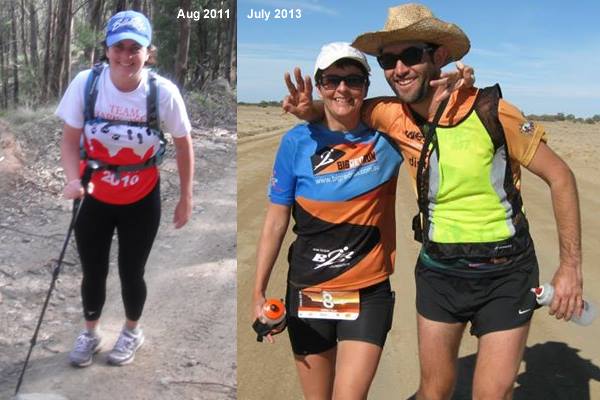 A few people have been asking me to write a bit about my experiences so I’ll keep in nice and short and break it into a series of indisputable facts.

3rd female, 7th overall, 33hrs to run 250km and plenty of time spent sight-seeing along the way. Don’t ask me where I managed to pull that from on my first multi-stage race but I felt comfortable and strong for 90% of the way. That last stretch on the 84km long day was a killer as always.

I had absolutely no interest in racing the BRR. I was there to enjoy the experience and take in the scenery. As soon as I got moving on the first day though I knew my body was feeling strong and my brain was in the right space. Each day I just kept getting stronger. I was pain free and didn’t have any sense of fatigue until toward the end of the 3rd marathon on the 3rd day.

Over the last 18 months I have dramatically changed the way I train and it’s really starting to work for me. The change has been fuelled by increasing understanding of what my own body responds to and also watching the large number of elite ultra runners that are now completely sidelined because they have overloaded their bodies with the wrong type of training. I may never be world champion at this sport but I plan to be taking out the 80+ year old age category in a few more years.

So what’s changed? I no longer believe in ‘running through pain’. If there’s pain I get it fixed, early. I no longer believe that you have to be doing ‘the big km’s’. If I regularly go above 80km a week I end up with injuries and training becomes inconsistent. So I am keeping the km’s low and focusing on intensity instead and giving all I can to every training session. I am more exhausted after a session at Crossfit 2036 or Sean Williams Sweat than I was after any of the marathons at BRR and I back up 4 mornings in a row week in, week out supplemented with long runs on the weekend. It provides incredible conditioning and with good condition you can do just about anything.

Finally a wonderful run of this magnitude is only possible with incredible support through the vollies and medical team. They were everywhere and always unerringly positive and helpful. One of the greatest sights in the world was one of those little red checkpoint tents appearing on the horizon, shimmering in the heat haze like a mirage.  I had a minor incident on the long run that could have easily brought the whole game unstuck in such an extreme environment but with their outstanding support I was home safe and well. Thank you!

FACT 2: THE LANDSCAPE IS MONUMENTAL

The Simpson Desert landscape is vast and more diverse than I expected. It is staggeringly beautiful. I don’t have the words to describe the impact it has had on me. I’m a nature nut and have been on a lot of adventures in all corners of the world and the Simpson Desert ranks up there as one of the greatest. It’s a silent, vast beauty. It commands attention through its stillness.

The sand dunes in the ‘channel country’ part of the Simpson all run north-south with wide areas of flat ground in between. They are like waves in an enormous sandy ocean. At any point we were either running parallel to the dunes or crossing them. Running over the dunes was an absolute delight. The climb was one of anticipation, wondering what would be on the other side. Each crest brought with it vast, sweeping views and revealed the next terrain feast laid out on the desert platter for kilometres in front of me. As a dedication to 5 year olds everywhere, it was then essential to hurtle down the dunes as fast as my legs would take me.

Surprisingly around 80% or more of the course was completely flat so the challenge of BRR isn’t so much in climbing dunes but dealing with the technical nature of what is underfoot. Gibber plains, hard clay pan, sand moguls and mud meant constant variation in gait and pace. Tuft grass hid endless burrows ready to snap an ankle should concentration wane. Scratchy “grrr” bush (need to find out the real name one day) lacerated bare legs creating a stinging brew when mixed with sweat and sunscreen. We had rain, cold, wind and intense heat. The desert giving us just a taste of its true potential.

Navigation of the course also demanded attention. Much of the course was cross country with no trails. We ran from one pink ribbon to the next. It was easy to get off course. Every day people returned to camp with stories of unplanned detours and gut wrenching moments of realisation when they discovered they were off track, tired and alone.

The highlights for me? Every day was an incredible adventure although I have noticed there are a few scenes that keep replaying in my head a bit over a week later.

Day 2 – I had just worked my way through a field of sand moguls with burrows, bushes and all manner of challenges. A head wind was blasting whatever slow progress I was making. I was glad to see the pink ribbons cross up and over the sand dune knowing the terrain would likely change. Cresting the dune and the world opened up to a enormous hard clay pan. The red checkpoint tent was a kilometre or two away on the other side and there were people around. I ran like crazy down the side of the dune, the momentum propelling me across the clay pan. At last running at full tilt, it was pure bliss.

Day 3 – Running along the top of big red after the rain. It’s one of the iconic photos that has come out of the week. The sand was an intense red colour and the air fresh. The rain had firmed the sand so it was easier to get some pace.

Day 4 – Sunrise. It was a clear morning and the intensity of the colour is like nothing I have seen before.

Day 5 – Early morning I was running along the top of a dune. The wind was gusting and lizards scurrying. Overhead two wedge tail eagles circled watching my progress. I had a strange feeling that if I didn’t keep moving I would be on a lunch menu.

Day 5 – Crossing the vast moonscape of the gibber plains. I love running on gibber. The rocks are all highly polished from water rushing over them in the wet season and underneath is sand so as you run along the ground looks like it should be hard but it is spongy. I also enjoyed being out in the intense heat on day 5 on the gibber. Strange I know but it felt like a real desert experience. Heat waves distorted the horizon. Dry air sapping any moisture from your mouth.

I miss the desert.

FACT 3: IT’S ALL ABOUT THE PEOPLE

I remember when I first met someone who had run 100km and it hit me how casually they talked about such an achievement.  It was much like other folk talk about going for a walk around the block; it happens, it’s nice to be able to do it, but for the regular doer it’s no biggie on life’s list of achievements.

Turns out I’ve become one of those people. A hundred kilometres on foot in a day barely even warrants a post except perhaps to mention you’re home, fed and relatively blister free. Every ultramarathoner knows how much of a privilege it is to do what we do.  It’s not something we take for granted but more that it’s just well…normal.

That’s where BRR was completely different to any other ultramarathon experience.  Many people on that start line were about to face their first marathon and then keep going for another 208kms.  It was an honour to bear witness to their journey.  Each morning it was awe-inspiring to see them overcome the fatigue and mental barriers to get to the start line.  Into the afternoon and sometimes the night we waited and watched the horizon for them to be making their way back to camp.  Each day while their bodies grew tired, their minds grew stronger.  Slowly they chipped away at the challenge and began to believe.  The last person across the line was out on the course 22 hours longer than me.  Close to an entire extra day.  I find the thought staggering.  The persistence and resilience it would take to keep going, the inner strength.

The transition to being an ultramarathoner is a life changing experience.  It redefines the boundaries of your world in the most profound ways.  To be in camp everyday with the true champions and support their journey is a memory I will hold dear forever.

Thanks so much to the BRR organisers, vollies, medics and the massage angels for making the journey possible. 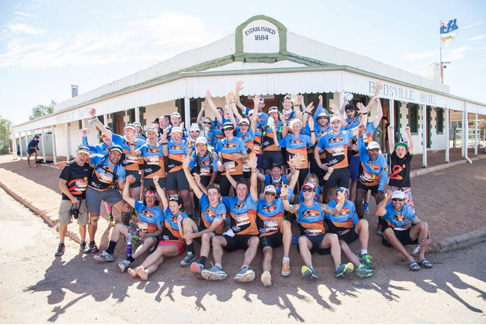